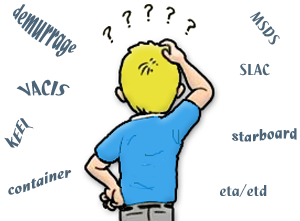 If you Google the word “Jargon” you will see it described as “special words or expressions used by a profession or group that are difficult for others to understand.”

The supply chain industry which includes shipping, freight and logistics has its own jargon, oh yes, and a lot of it usually flummoxes many people in the industry.. I was thoroughly confused with all these when I started out in the industry..

We deal with a lot of shipping jargon and abbreviations on a daily basis, but not all of us know what it means and the implications of incorrect usage of the jargon..

This may also include abbreviations commonly used but which may not be fully understood..

Here are some of the shipping, freight, maritime, logistics, supply chain and trade jargon explained..

ETA = Estimated Time of Arrival – commonly used to denote the date and time at which a ship is expected to arrive at a port.. Usually seen in shipping schedules circulated by shipping lines or information provided to the port..

ETB = Estimated Time of Berthing – commonly used to denote the date and time at which a ship is expected to berth at a port/terminal.. This term is usually seen in pre-arrival notifications sent to the ships..

ETC = Estimated Time of Completion – commonly used to denote the date and time at which a ship is expected to complete its cargo operations.. This term is usually seen in arrival reports sent to ship owners..

ETD = Estimated Time of Departure – commonly used to denote the date and time at which a ship is expected to depart from a certain port/terminal.. This term is usually seen in arrival reports sent to ship owners and also in shipping schedules circulated by shipping lines or information provided to the port..

FCL – Full Container Load – means that the container has cargo that is shipped by one shipper for delivery to one consignee.. FCL is one of the Container Service Types in shipping..

LCL – Less than Container Load – this is when the same container is used for cargoes belonging to multiple shippers and consignees.. The clients deliver their cargo to the lines packing station (CFS – Container Freight Station) and the line then packs the delivered cargo on behalf of the client.. LCL is one of the Container Service Types in shipping..

Port and Starboard – There are several ideas and versions of the origin of these words, but in simple shipping terms, it means the LEFT SIDE and RIGHT SIDE of the ship respectively..

MSDS – The abbreviation stands for Material Safety Data Sheet.. An MSDS is a form containing all possible information relating to the hazardous cargo in question.. It provides guidance in handling the commodity and the properties and composition of the item in question..

SLAC – The abbreviation stands for “Shippers Load Stow and Count” and is used extensively and mainly in containerised shipping..

STC – this abbreviation stands for Said To Contain.. You would see this abbreviation on bills of lading for containerised cargo which means the Shipping line is saying that based on the shippers declaration, the container is said to contain XYZ cargo and they haven’t verified the contents..

BAF – stands for Bunker Adjustment Factor which is basically a charge levied by the shipping line to cover the cost of fuel on the ship..

CAF – stands for Currency Adjustment Factor which is a surcharge implemented by certain countries on their trade routes to cover the volatility of their currency against the major currencies used in trades like USD and EUR.. Countries like Ethiopia still apply CAF..

VGM – Shortform for SOLAS Verified Gross Mass.. Basically each container that is exported has to have its weight checked and declared to the shipping line before it is loaded..

SOLAS – SOLAS Convention is one of the Conventions of the International Maritime Organisation (IMO) which specifies minimum standards for the construction, equipment and operation of ships, compatible with their safety..

MARPOL – The International Convention for the Prevention of Pollution from Ships (MARPOL) is the main international convention covering the prevention of pollution of the marine environment by ships from operational or accidental causes.

BCO stands for Beneficial Cargo Owner – refers to a cargo owner who could be a direct exporter, direct importer, seller or buyer..

Smart Container is a container equipped with sensors designed to provide real-time tracking of its location and movements..

Using this technology, whether you are a shipping line, customer or security agency, you can track the progress of your containers anywhere in the world, plan your equipment and stock inventory which could possibly lead to reduced costs….